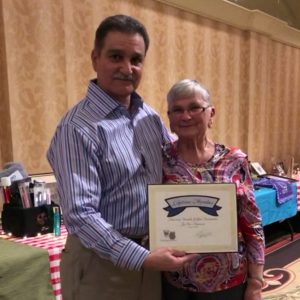 Long time ABGA member, JoAnn Adamson of “Jimijo Brussels Griffons” was awarded a Lifetime Member at the annual club banquet held during the 2018 National Specialty.   JoAnn works tirelessly for the club’s benefit and is more than willing to jump in and assist where needed.

A little bit about JoAnn from her perspective:

A simple explanation on how I got interested in dogs & dog showing. In the mid 80’s my husband, Jim, took a two-year contract in Saudi Arabia. I was employed with the Alaska Railroad at the time, with full intentions of going over to Saudi as soon as passport clearance allowed. This took about 6 months before I found myself arriving in this very different, but interesting country. Things seemed to go on 6 months cycles, so after my first 6 months there, I found myself ready to return to Anchorage Alaska, & my job with the Railroad.

It wasn’t very long before I found that I needed something to do in my after-work hours. I had a friend that just happened to have a litter of Shih Tzu’s, who was also involved with the Alaska Kennel Club, & showing. Sounded like something I might like. One of her puppies picked me out, and that is how it all started! However, it wasn’t more than a year or so, that I became very ‘burnt out’ with the coat care, so I started looking into other breeds. I went to a Shih Tzu Specialty in Portland, Oregon. & saw my first Brussels Griffon, and knew right then, that this was The Breed FOR ME! I met a breeder named Sheila Hilgart (the Wee One prefix). I went home with a red rough female named Wee Ones Ginger Snap, & 6 months later I brought Wee Ones Lil Black Sambo at Jimijo home. This was a whole new world. I knew nothing about stripping a coat. (I won’t say it was a hard transition from the Shih Tzu’s but was a real learning process!) I had my first litter in 1987 & finally, a “Bred by Exhibitor” for me to show. I have shown big winners and little losers but I loved them all!

I have 30+ years with the breed in my life & have no regrets. They are a learning process and I yearned for information on them. I joined the NBGC, and as soon as the American Brussels Griffon Association had open membership, I joined, with never a regret. The knowledge I gained is beyond words! I truly think I have attended far too many Nationals, but I am still learning with the seminars/health lectures that are now available to ‘us’! Hope they are forever available.

Hubby did come back from Saudi Arabia to a houseful of little funny bearded “people”. He has adapted well![/vc_column_text][/vc_column][/vc_row]